Hello and welcome, thank you so much for your visit. I hope you have a great time touring the website. Please read on to learn about my background and how this album came to be.

A Time to Be Blue is a musical adventure that was born in Yaoundé, Cameroon, when my mother, Bernadette Ella gave birth to her only child. My mother would sing me a lullaby every night in my early childhood years, old African songs that often mimicked the sounds of traditional instruments or told of forgotten tales. Melodies quickly became an intricate part of my life, and when I was four, my mom enrolled me in a flute class. Three years later my flute teacher moved back to her native Germany, so my mother signed me up for classical piano lessons. For the next seven years, piano became my main instrument as I discovered the genius of Mozart, Chopin, and Beethoven, among other great composers.
One day, at age 15, I heard a friend play the blues on an old acoustic guitar. The way the guitar moaned at the touch of his fingers, the chemistry between his voice and the sound of the strings captivated me. It was as though I had never heard music before. The next day, I hounded my mother about buying me an acoustic guitar. To my mom, a modern dance and ballet teacher, the guitar was not as noble an instrument as the piano, but at least I wasn’t giving up on playing music. So, she bought me a simple, yet beautiful classical guitar and my musical life was forever changed.

Growing up in Cameroon, music was everywhere. Choirs performed in churches on Sundays, with harmonies so beautiful they left you speechless. They sang at weddings, and they sang at funerals, with a burst of energy that lifted you off the ground. Music was a remedy for grief and a shout for joy. I learned to savor the rich Cameroonian popular music scene, from the sophisticated Makossa of the Duala people to the frenetic Bikutsi rhythms of the Ewondo from the central region. My mother’s vinyl collection introduced me to African icons like Ernesto Djedje, Eko Roosevelt, Manu Dibango and Fela Kuti, while my father’s musical favorites helped me discover the likes of George Brassens, Jacques Brel, and James Brown.

But when I heard the blues, it felt like a culmination of all the musical experiences I had lived to that point. A genre steeped in its African heritage, I found not only the music, but also the history behind it. Acoustic blues particularly moved me to my core: It featured the call and response so common to traditional African songs, except in the blues the response came from a guitar. I felt the authenticity of the pain and the sorrow of the performers, but also the healing they found in singing about it. I fell in love with Nehemiah “Skip” James, Bessie Smith, Ma Rainey, Lightnin’ Hopkins and of course, Robert Johnson, among many others.

The music in A Time to Be Blue is soaked with influences from all the genres that have shaped me over the years. It speaks softly, breaks your heart, but also heals it. It sings of loss, but fills the hole left behind, like the ode to my mother in “She’s Gone” or the tribute to a dear friend departed too soon in “You Left Me Blue.” It rocks you gently as you curl up with a book and a cup of tea with “Naima’s Evening Song,” but also invites you to dance to the rhythms of my native city of Yaoundé in “Home.”

I am forever grateful that way back in the early 80s in Cameroon, Bernadette Ella decided that music would be a fundamental part of my life. So here I am, sharing some of my music with you, hoping that it brings you joy and is as fun to listen as it was to record.

Thank you and happy listening!

If you would like to contact J.R. Ella,  please use our webform here. You will be contacted shortly thereafter. 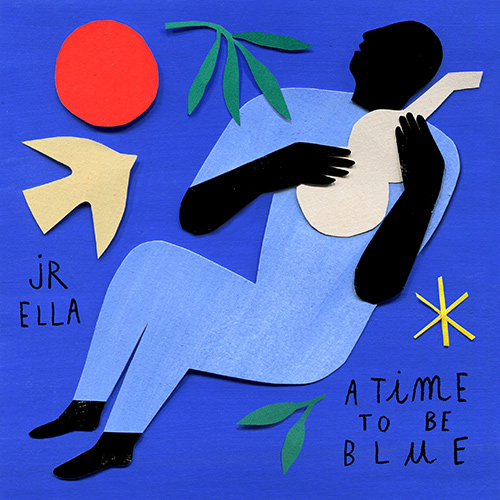 A Time to Be Blue (Album)

Get permission to use our copyrighted music for your next content creation project: We offer licenses for cinema and film, trailers, TV shows, broadcast news, YouTube and other video platforms, documentaries, web, ads, corporate presentations, weddings, derivatives, grand rights and more.